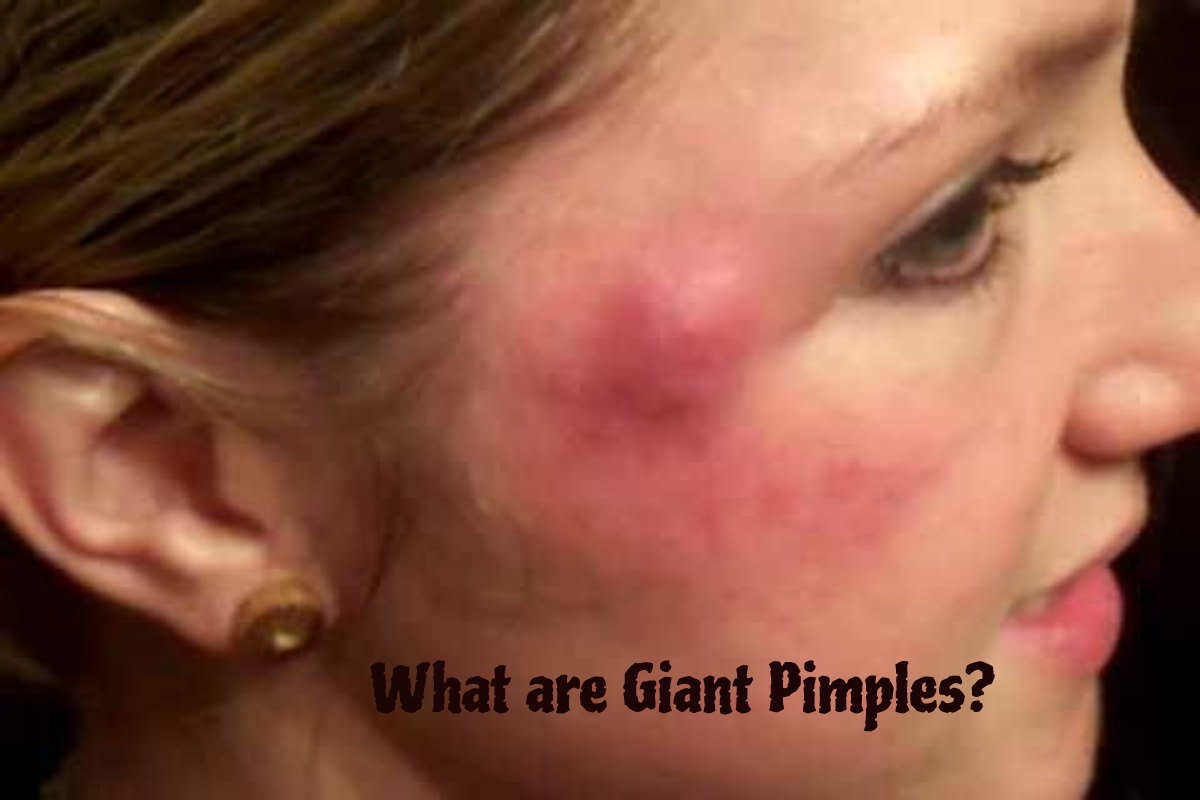 What are Giant Pimples?

When discussing giant pimples, we refer to large spots that cause discomfort and embarrassment.

In truth, there is no precise dimension beyond which it is possible to define a giant pimple. Therefore, the definition of “giant pimples” is subjective and can vary from individual to individual.

In any case, with a similar vocabulary,we generally want to indicate those pimples whose dimensions are such as to create a certain degree of discomfort in the person who manifests them, both from a physical point of view and from an aesthetic point of view.

What are Giant Pimples?

As mentioned, there is no one-size-fits-all definition of giant pimples, as assessing the size of these annoying skin lesions can be highly subjective.

Moreover, often and willingly, when we talk about giant pimples, we refer in a generic and sometimes improper. And indistinct way both to the manifestations of acne, both to closed comedones ( whiteheads ) and boils abscesses under the skin of immense dimensions.

Despite the generic use of the term, giant pimples should not be confused with sebaceous cysts, benign, rounded-shaped subcutaneous growths that generally form following the obstruction of a sebaceous gland or its duct.

How do giant pimples manifest?

Giant pimples manifest as large skin lesions, or in any case, the size of which consider to be such by the individual who presents them.

Depending on whether they are manifestations of acne, closed comedones, boils, or pimples under the skin, giant spots can take on different characteristics.

Despite this, it is possible to state that, in general, these lesions have a rounded and elevated shape, are red, and are often painful due to the inflammation that typically characterizes them.

On the other hand, the consistency can be hard or soft, as well as it can evolve from an initial hardness to a subsequent softening that occurs as the pimple grows and inflammation increases. Giant spots can also have the so-called white dome containing sebum.

Where do giant pimples show up?

Giant pimples can potentially show up in areas where sebaceous glands and hair follicles are present. However, they tend to appear more frequently on the face (mainly but not exclusively in the so-called “T-zone” – forehead, nose, chin), on the back, in the groin, and sometimes on the buttocks.

What are the Causes of Giant Pimples?

In any case, these are skin lesions characterized by inflammation .And, sometimes, by infections – which can affect the sebaceous glands, hair follicles, and peri-follicular tissues.

Alongside the inflammatory and infectious processes, there may also be hyperactivity of the sebaceous glands with consequent production of high quantities of sebum.

However, among the main factors that  believe to be involved in the onset of giant pimples, we remember:

Diet: an unregulated diet rich in fatty foods and sugars seems to favour the appearance of giant pimples and the overproduction of sebum by the skin.

Hormonal factors: Hormonal upsets that can occur during adolescence or at other stages of life (such as occurs, for example, during pregnancy) .Can lead to increased activity of the sebaceous glands and the appearance of giant pimples on the face and on the body.

Poor hygiene: Poor personal hygiene, both of the face and body.It is also a factor contributing to the appearance of pimples whose size can become considerable.

Exposure to UV rays: excessive and uncontrolled exposure to UV rays – whether natural or artificial ( tanning lamps ) – seems to be another factor capable of favouring the appearance of pimples, even giant ones.

Finally, remember that a risk factor for the appearance of giant and non-giant pimples that underestimate can represent by stress.

Did you know that  Sometimes, ingrown hairs can cause papules or pustules confused with giant pimples?

Although also, in this case, there is an inflammatory component, the triggering causes are different .Since it is the presence of the same hair that grows under the skin that gives rise to the inflammation and the formation of the skin lesions mentioned above.

What Symptoms Do Giant Pimples Cause?

Giant pimples can create considerable discomfort, not only from a purely aesthetic point of view but also on a physical level. Since they can give rise to very annoying symptoms. In detail, giant pimples often cause itching and pain.

In some cases, they may even itch early on and then become sore as their size increases. Other typical symptoms are swelling and redness of the skin area where the pimples occur.

The symptoms described above can be even more annoying when it occur in areas subjected to pressure (for example, on the buttocks) in the regions that come into contact with clothing.

And are subject to rubbing with the latter (as occurs, for instance, on the buttocks).

For example, in the case of giant pimples located in the inguinal region in correspondence with the area in contact with the elastic of the briefs).

A typical complication of giant pimples is the onset of infections or their spread to the surrounding areas if these are already present.

In addition to this, the appearance of scars cannot rule out. If pimples break or are squeezed, or cut, they can leave more or less deep scars. Once the lesion has healed completely.

Depending on the degree of severity of the spot that has appeared. It is possible to resort to various treatments: the slightest scars can attenuate by professional aesthetic treatments;

On the contrary, significant, obvious, and deep scars may require aesthetic medicine treatments to be eliminated.(for example, chemical peels of a medical nature, dermabrasion, radiofrequency, etc.).

Finally, a possible evolution towards more severe skin lesions such as cysts.

It can potentially leave scars once healed, cannot be excluded.

Cures and Treatments for Giant Pimples

In truth, there are no specific treatments to get rid of it. They can resolve spontaneously over a while; in still other cases, however, it may be necessary to resort to specific products or even drugs.

If the giant pimples do not resolve spontaneously within a short time, the use of a doctor’s consultation is necessary; the problem of big spots will list below.

First of all, the behavioural precautions to be put into practice to favour giant pimples resolve to avoid manipulating these skin lesions in any way.

Big spots squeezed or squeezed since this practice – in addition to in no way ensuring faster healing.

It  can lead to the appearance of the complications described above, such as scars, infections, or the spread of the latter to the neighbouring areas if they are already present.

Another fundamental aspect in solving the problem of it represent by choice of cosmetics to use in the areas where they are present. We remind you of the importance of using quality cleansers suitable for your skin type.

In no case, excessively degreasing products used because the skin, subjected to a sort of aggression.

It would be pushed to produce more significant quantities of sebum in an attempt to restore normal physiological conditions.

In addition to daily cleansing, carried out with the right products to further promote cell turnover .And the resolution of it.Cosmetics with physical exfoliating action ( scrub ) or chemical (chemical exfoliants) can be helpful.

Treatments with cosmetic products are only carried out in non-serious and uncomplicated giant pimples. If not, you are reminded again of the importance of seeing your doctor.

The doctor should always prescribe pharmacological treatments for it. Although drugs against spots are available on the market. That can purchase without the need to present a medical prescription ( over-the-counter drugs – OTC – and SOP drugs ).

Their use should not carry out without first having asked the opinion of the health mentioned above figure, necessary to identify. And rule out the presence of any contraindications to the patient’s use of similar medicines.

The primary drug use against giant pimples and pimples. In general, are based on active ingredients with comedolytic, keratolytic, and possibly antibacterial action.

For particularly severe cases characterized by painful inflammation and infections, the doctor may resort to topical corticosteroid and antibiotic drugs.

Finally, if the formation of giant pimples is a problem of medical importance related to hormonal factors. And if the patient is female, in adulthood, and not pregnant, the doctor could evaluate the possibility of administering oral contraceptives.

The incision of giant pimples and the removal of any cysts resulting from the complication of the latter.

It should be carried out only and exclusively by the doctor, even better if a specialist in dermatology.

In addition to respecting strict hygienic criteria. Such a practice must perform with full knowledge of the facts to ensure a successful operation. And avoid complications and adverse effects of any kind.

Despite the possible treatments available, prevention remains the best strategy to put into practice against the appearance of it. Or, possibly, against their complication in more severe conditions.

So, here are some ideas that can be helpful to prevent the onset of difficulty of skin lesion.

Carry out thorough daily cleansing of the skin, with particular attention to the one on which giant pimples are present.

Use quality cleansers and cosmetic products that are non-aggressive or excessively degreasing and suitable for your skin type.

Adopt a healthy diet by limiting foods that are very fatty and high in sugar.

Avoid grandma’s remedies and do-it-yourself remedies of dubious utility (for example, toothpaste on giant pimples). Instead, contact your general practitioner and a dermatologist for information on eliminating or counteracting the appearance of big spots.

Of course, given the numerous factors involved in their onset, even following the advice above. It is possible to encounter the formation of giant pimples.

However, a healthy lifestyle associated with a good level of personal hygiene is still helpful.

And in maintaining the well-being of both the skin and the entire body.

Factors to Consider When Buying Pajamas

What’s the quickest way to get rid of a pimple