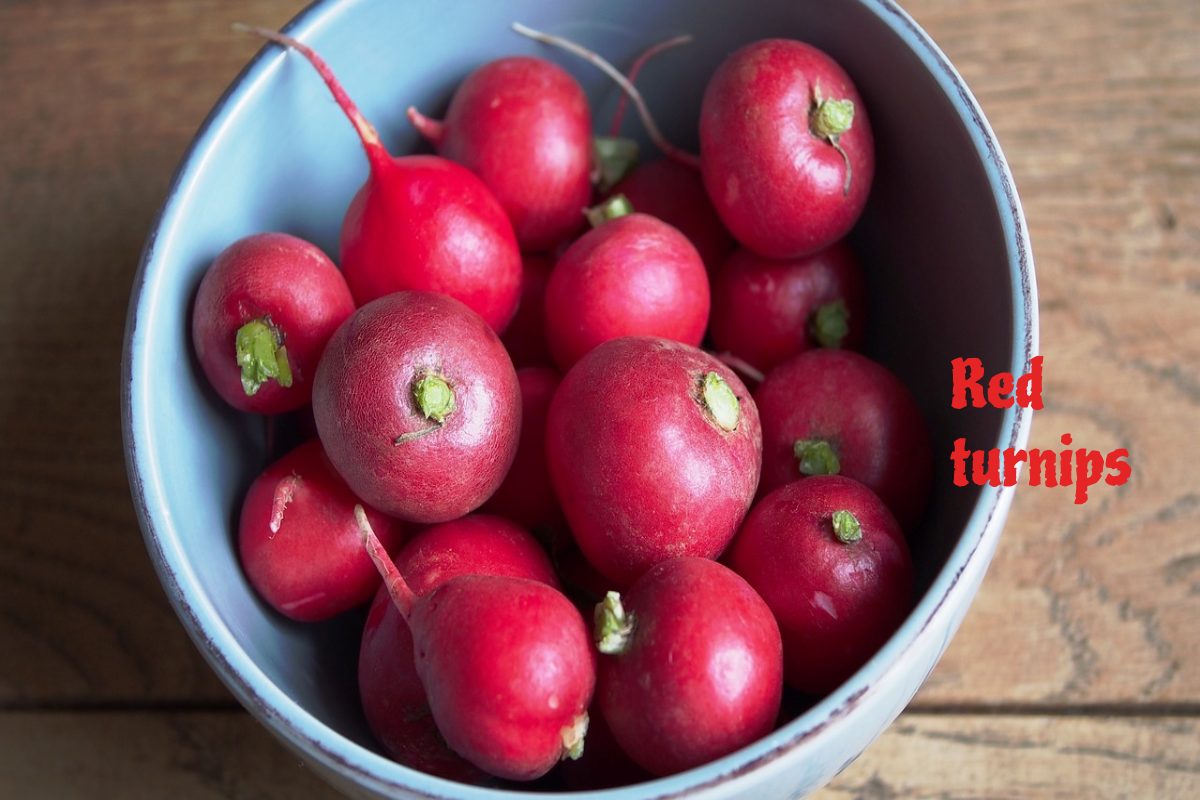 Red beards, red beets or, again, red carrots: these are all dialect synonyms used in the local language of some Italian regions, all referring to red turnips.

We are talking about an unmistakable tuber for its particular bright red colour.So much so that the characteristic pigment of red turnips, betanin, is also widely used by the food industry.

Red Turnips :Despite the appeals of dieticians and food specialists, we often tend to forget the phytotherapeutic and practical importance of some vegetables like, in this specific case, the red turnips.

After a general and botanical description, we will analyze this precious red tuber’s nutritional and therapeutic characteristics.

Although belonging to the same family, red beet should not confuse with sugar beet.

The red turnip has ancient origins: so much so that its consumption mention in some very ancient Greek writings dating back to 420 BC, a period in which the red tuber was known simply as Beta.

However, according to the thinking of other authors, the origin of red turnips dates back to 2,000 BC, given the presence of some archaeological finds that attest to it.

Since ancient times, man has exploits the red turnip as a food that well suits to accompany meats.And also  tasty dishes.

However, the preciousness of the red turnip does not stop only in the culinary field. As we will deepen the article’s explanation, the red turnip is also essential for its therapeutic properties. Not surprisingly, we talk about a red turnip to concentrate on vital elements in human health.

The beetroot is a tuber native to European countries and North Africa, currently cultivated in all areas of the Mediterranean.

The beetroot, which does not require particular cultivation conditions, is well suits to any soil.Although it prefers slightly acidic and clayey.

The red turnip  grows to 800 meters above sea level and loves regions with a temperate climate.

Beetroot is tubers known in botany as Beta vulgaris var.

Turnip from Rubra: a plant belongs to the Chenopodiaceae family and the Beta genus.

There are forage, vegetable and sugar varieties.

The beetroot is a biennial herbaceous plant, sometimes cultivated as an annual (height 0.5-1 meter): similar in shape to the beetroot; the beetroot has red skin; also, the root, the leaves and the petioles painted the same ruby colour.

In addition, the leaves have a particular heart shape, and, in cultivated species, they reach a length greater than 20 centimetres.

In contrast, the flowers have five petals and gather in spikes.

The beetroot blooms in the warm months, particularly from July to September.

Red turnips contain very few calories (only 19 per 100 grams of product): for this reason.

They are among the low-calorie foods, excellent foods preferable therefore in balanced diets that require a marked caloric restriction.

Red turnips consist of a good quantity of water, corresponding to approximately 91%; there is only 4% of carbohydrates and 2.6% of fibre. And the remainder is made up of proteins and, to a minimum, fats.

Red beets :Being a root, the beetroot acts as a mine of mineral salts.

And wisely absorbed by the soil: potassium, iron, calcium, phosphorus and sodium. Vitamins also play a leading role in vegetable composition: B1, B2, B3, A (traces), and C stand out.

In addition, a glycoside is present in the red turnip root, which attributes the typical bright red colour to the turnip:

It is betanin, used – as mentioned – by the food industry as a natural colour ( E 162), obtained from the root by squeezing or extracting with water from fragments of the root system. Another pigment found in beetroot is betaxanthin, which gives it yellowish streaks.

Furthermore, other substances exploit in the beetroot root in phytotherapy and cosmetics: saponins, anthocyanins, flavonoids in general, and allantoins (moisturizing and anti-reddening properties).

Red turnips ate cook, although it is preferable to eat them raw, grated, or in skinny slices to take all the vitamins, minerals, and fibres.

Some like to bake beetroot in the oven, then toasted and au gratin.

In phytotherapy, the red turnip decoction recommends as a purifying, remineralizing and digestive agent.

As we have seen, the red turnip boasts numerous therapeutic properties, wisely exploited in the herbal-phytotherapeutic field.

It is a vegetable with primarily purifying and refreshing properties. Given the richness of minerals, beetroot include among the highly remineralizing foods. However,  not recommends for kidney stones for the same reason and the richness of oxalates.

The consumption of red turnips recommends for anemics. It seems that the chemicals present in the vegetable .It can revitalize red blood cells and rebalance iron levels in the blood.

Among the other properties attributes to the beetroot, the antiseptic, nourishing and restorative properties  mention; for these reasons, the consumption of turnips is particularly beneficial in flu states.

The red root is also helpful in promoting digestive functions.

As it stimulates the production of gastric juices: strictly speaking.And not recommended for those suffering from stomach acid.

The consumption of beetroot is also contraindicating for diabetics, given the low sugar content (4%) of this vegetable.
In cosmetics, red turnips extract the red pigment and prepare creams with a capillarotropic and anti-reddening action.

In the International Journal of Cancer, the role of beetroot as a potential anticancer food is discussed.

The question is in some ways debatable and obscure, and no undoubted and unequivocal proof confirms the hypothesis. In particular, the journal above discusses the possible role of beetroot in preventing colon cancer; for others, beetroot would be able to avoid cancer and fight it.

Also Read: What is Vaseline? And its Uses